The majority of the coastal zone is managed by the Council on behalf of Crown Land Services and is therefore prohibited to cats under the Tasmanian Cat Management Act 2009.

The coastal zone is an important area for protected shorebirds, little penguin rookeries and other wildlife that are especially vulnerable to predation by cats. To protect this sensitive coastal community the Council will be conducting a Pilot Cat Control Project over winter 2020.   The first stage of the Pilot focused on the beach and vegetation areas from the water to the railway line, from Preservation Bay to Howth. The Pilot Cat Control Project has been funded through the Federal Government’s Community Environment Program.

The Central Coast Council is working co-operatively with the RSPCA and Coastcare to ensure that the Pilot Cat Control Project is conducted humanely. We recognise what wonderful companions cats make to so many people in our community and encourage responsible pet ownership. The Tassie Cats Website has extensive information about keeping your pets safe at home and advice regarding the microchipping and desexing of cats.

Semi-wild and domestic cats trapped during the Pilot Cat Control Project will be taken to the RSPCA facility in Spreyton and kept safely until reclaimed; a fee will apply. Unchipped cats will be de-sexed, chipped and rehomed if left unclaimed. If your unchipped cat is taken to the RSPCA you can reclaim it but you will be required to pay for the microchipping and de-sexing.  The Council acknowledge the good work being done by the RSPCA and will donate a surrender fee to cover the cost of the humane care of all the cats caught under the Pilot Project.  The RSPCA is located on 108 Tarleton Road in Spreyton and can be contacted on 6427 2566.

In 2019, the Sulphur Creek Preservation Bay Coastcare group commenced discussions with the Council about ways to improve the sustained protection of shorebirds and Little Penguins. There was an opportunity to apply for a Federal Government grant to undertake a cat control project, but the Coastcare group needed the Council’s help as a sponsor and (as managers of the land) the Council’s involvement in the project.

Generally, the message received from the Central Coast community has been overwhelmingly supportive for improved cat management, a task usually assumed by State Government. In response, the Council agreed to sponsor a Pilot Cat Control Project with the first stage focusing along the coast from Howth to Preservation Bay, approximately 5.7km.

Extended discussions with the ever-helpful Cat Management Coordinator, Margot Oorebeek from Tassie Cats led to links and connections needed to forge a highly skilled project team. We met with RSPCA staff in Spreyton and found an experienced and qualified trapper in John Bowden.

Cats are wonderful companion animals. They are also very efficient predators of our native wildlife and in addition, cats, especially those that roam, can spread diseases such as toxoplasmosis which is fatal to many of our wildlife, including bandicoots and pademelons. Toxoplasma gondii is a parasite that can reproduce only in the digestive system of a cat. Humans can become infected with Toxoplasma through contact with parasites shed into the environment from infected cat faeces, or by eating raw infected meat. Pregnant women and people with weakened immune systems are the most vulnerable.

Stage 1 of the Pilot Cat Control Project saw 25 traps set out over six nights between the end of June to mid July. Seventeen cats were caught during that period within the 5.7km coastal strip. Four of the cats caught were cared for by the RSPCA in Spreyton and all but one of these cats was reclaimed or rehomed. The thirteen feral cats were humanely euthanised. 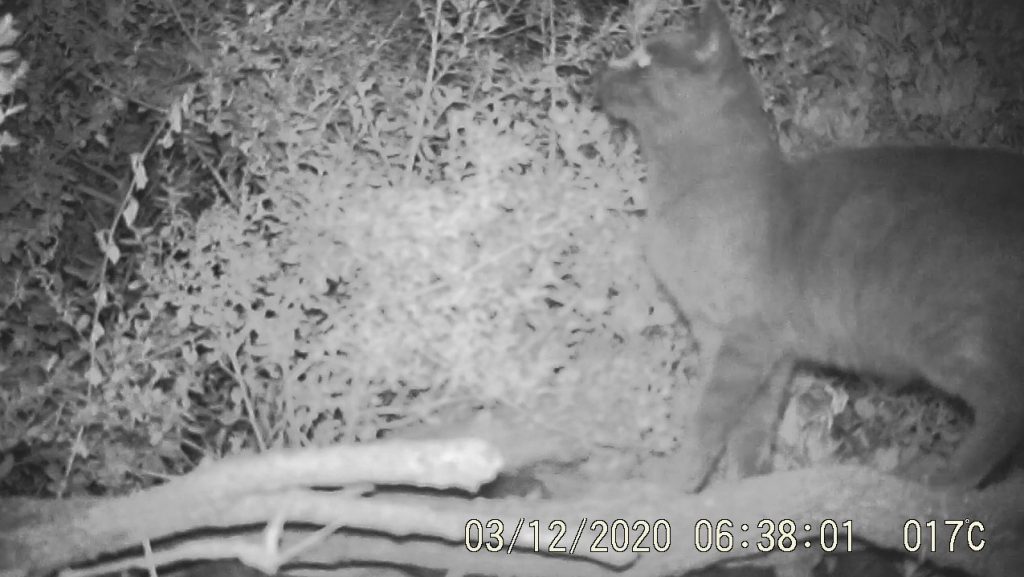 Stage 2 of the Pilot’s trapping will occur in late August 2020. The program’s next step will be a continuation for one more season in winter 2021. The Council are also considering extending the trapping area into other coast zones. Under the Tasmanian Cat Management Act 2009, cats are prohibited in the coastal environment.

The Pilot Cat Control Project has been a great success. The partnerships formed are invaluable and Central Coast wildlife is better protected, for now. Long-term success requires ongoing support from the community and an understanding of how we can all enjoy the company of pets, whilst maintaining a healthier community and vibrant wildlife populations by responsibly containing cats in the home or yard.

Cats make wonderful pets and bring pleasure, health benefits and company to many people. It is estimated that 24 per cent of households have cats, with the vast majority owning one or two cats.  Unfortunately, cats are also very effective hunters and they represent a significant threat to many Australian native animals. Even well-fed domestic cats kill wildlife because of their hunting instinct.

Diseases are spread by cats, not only to native animals, but also to livestock and humans. Toxoplasmosis is fatal to a number of Australian herbivores, including, bandicoots, wombats, possums and wallabies.  The cat-borne diseases toxoplasmosis and sarcocystis are a costly problem for Tasmanian livestock producers. Toxoplasmosis can cause miscarriages in sheep, goats and pigs, while sarcocystis creates cysts in the muscle tissue of sheep, making it unsuitable for sale.

Cats also create significant nuisance in the community. These include the smell of cat urine (e.g. on doorsteps or garden furniture) from local cats ‘marking’ their territory and the presence of cat faeces (and the associated health risks) in people’s gardens. Sadly, encounters with cats can leave a pet dead or with serious injuries and infections and create a lot of stress for other people’s animals. Roaming cats may also be noisy at night when fighting over territory or when seeking a mate.

With careful management it is possible to better protect and enjoy our pet cats, our environment and our native wildlife. 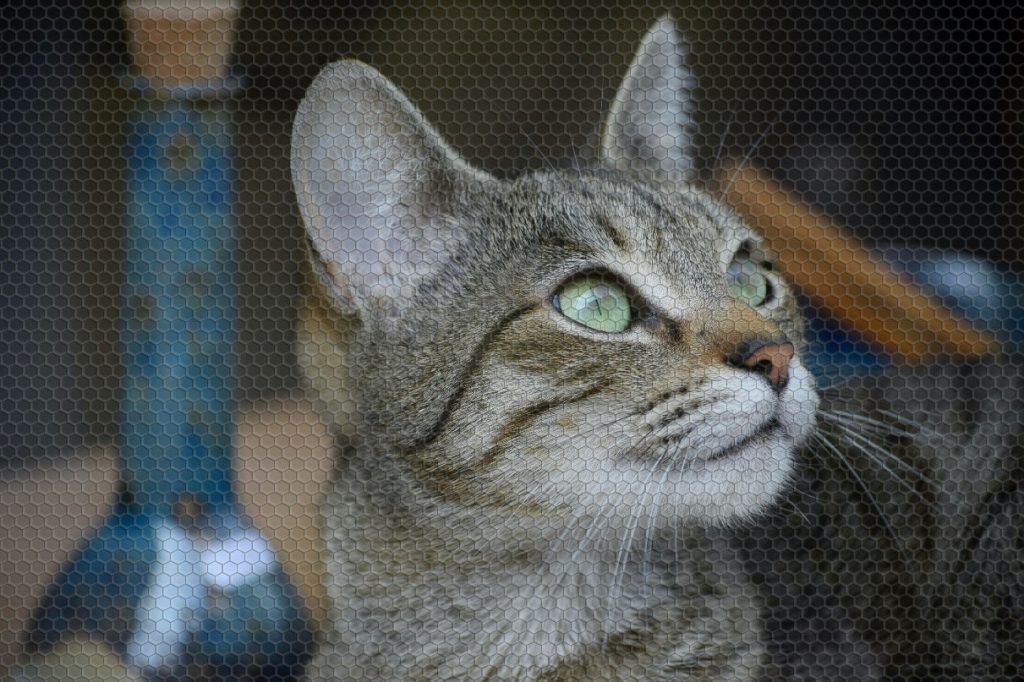 With careful management it is possible to better protect and enjoy our pet cats, our native wildlife and our neighbourhood.

We all have a responsibility to reduce the impact of our cats. Here are some things that you can do to provide safer and better conditions for your cat, for native wildlife and your neighbours.  Click on the headings below to reveal more information.

The TassieCat 'Cat Management Legislation in Tasmania' brochure is available to download below:

Keep your cat from roaming

Cats kept indoors or in a special ‘cat yard’ won’t prey on wildlife and you will enjoy their company too!

Pet cats that are prevented from roaming are protected from injury and from catching diseases from feral cats.

Whether you see it or not, cats do roam. Research shows that the average cat can roam up to three kilometres in a night or day. That’s three kilometres’ worth of risk and stress for your cat. Containing your cat to your house and yard is safer for your cat, gives you peace of mind and saves you money on vet bills. It will also protect wildlife and stop your neighbours complaining.

Click on the green button below to view the Threatened Species Recovery Hub - Fact Sheet - The Impact of Cats in Australia.

Fact Sheet - The Impact of Cats in Australia

Click on the green button below to view the Threatened Species Recovery Hub - Fact Sheet  -The Impact of Cats on Australian Wildlife.

Fact Sheet - The Impact of Cats on Australian Wildlife

Cats don’t need to roam to be content and healthy.  Cats are happiest when they are at home. They love your attention and to play, explore, sleep and watch the world go by in the safety of their domain.  Click on the green button below to view the RSPCA Guide, Keeping Your Cat Safe and Happy at Home.

Keeping Your Cat Safe and Happy at Home

Have your cat desexed

A desexed cat lives longer and is less territorial. It will wander, fight and mark its territory less and in general, it makes a much better and happier pet.  Desexing prevents unwanted litters of kittens that contribute to stray and feral populations and thus to the ongoing demise of native wildlife.

Identify your cat as a pet

Cats that are lost and are microchipped and/or collared and tagged, can be identified and returned safely home to their owners.  Contact your local vet or nearest RSPCA to learn more on microchipping and costs involved.

It is estimated that one in five households feed a stray cat that isn’t the family pet. This act of kindness increases the feral cat population, prolongs the suffering of the cat and will impact on native wildlife (through the cat's predation and possible disease).  The vast majority of stray cats are not desexed. They will breed more cats into a life of disease and neglect. Please either take full ownership and responsibility for any stray cat or take it to the RSPCA.

Also make sure any food waste, rubbish and grain storage is secure from all animals. This will reduce the food available to stray cats and rats and mice (which attract cats

Under legislation it is an offence to abandon a cat. Dumped cats have a very poor quality of life. They have a high risk of parasites and illnesses and being in fights and accidents. They can become feral and will prey heavily on wildlife as a food source. If you are unable to care for a cat or find it a good home, it should be taken to the RSPCA.

Encourage neighbours, friends and relatives to do the same

A surprising number of people still do not realise the impact that cats have on wildlife or what simple measures might be taken to reduce this impact. By spreading knowledge about responsible cat ownership we can all help to reduce the pressures that our native wildlife faces from cats.

In the past 200 years Australia has recorded the highest number of mammal species that have suffered major decline or extinction due to invasive predators. The red fox and feral cat have been the most damaging. Globally, cats are listed as one of four invasive species (along with rodents, dogs and pigs) that threaten the greatest numbers of endangered vertebrates.

A feral cat is a cat that lives, feeds and breeds without any input from humans. Feral cats may never see humans during their lives and they are very wary of human contact. Feral cats in Australia are descended from pet cats whose ancestors were released, lost or escaped from their owners. A feral cat is different to a stray cat, which is a pet cat that has been lost or wandered from its home, or that has been dumped by its owner(s).  Stray cats usually rely on humans for food at least to some extent, even if it is by scavenging from around human settlement and they have at least some tolerance of human presence.

Under some circumstances a stray cat, or more usually its descendants, may become truly feral. Stray cats may of course become pet cats again if they find suitable homes but it is extremely rare for a truly feral cat to ever become a pet.

In 2008 the Tasmanian government estimated that there were 150,000 stray and feral cats in Tasmania. To survive each of these will kill hundreds of native animals each year and the vast majority will be carriers of toxoplasmosis.

The decline of the Tasmanian Devil due to the devil facial tumour disease has led to both an increase in feral cats numbers in Tasmania and the amount of time feral cats are active at night. This further increases the threat to our unique wildlife.

It is estimated that every day feral, stray and domestic cats across Australia kill tens of millions of native animals, including one million native birds.

Cats and Wildlife – How You Can Protect Both (DIPIPWE)

Department of the Environment and Energy – Feral Cats

Keeping Your Cat Safe and Happy at Home (RSPCA)